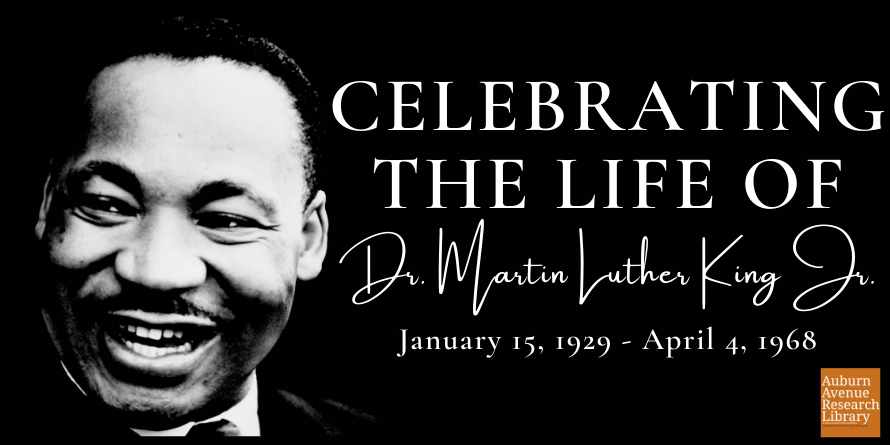 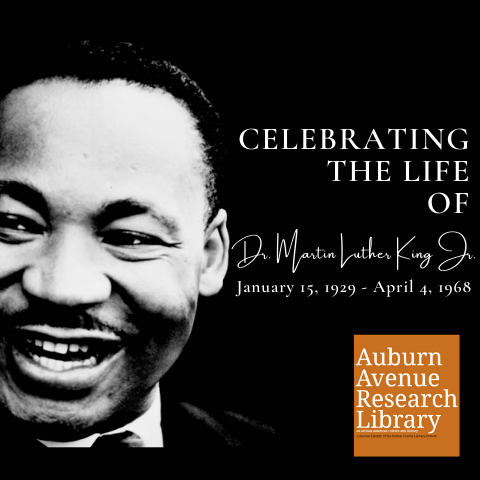 To help celebrate Dr. Martin Luther King, Jr.'s life and legacy on MLK Day 2021, the Auburn Avenue Research Library on African American Culture and History (AARL) has compiled notable archival collections at AARL, web resources to assist in learning more about Dr. King, videos of past programs related to Dr. King and his legacy, and age-appropriate reading lists compiled by the staff of the Auburn Avenue Research Library.

Dr. Martin Luther King, Jr. was an American Baptist minister and activist, who became the most visible spokesperson and leader during the civil rights movement until his assassination in 1968. The Atlanta native, Morehouse graduate, and Nobel Peace Prize recipient is known for his contributions to the American civil rights movement of the 1960s. His most famous work is his “I Have a Dream” (1963) speech, in which he spoke of his dream of a United States that is void of segregation and racism.

Each third Monday of January celebrates Martin Luther King Jr Day— this occasion is the only federal holiday designated as a national day of service. Readers around the globe explore the legacy, life, and history of the Atlanta native, and continue the pursuit of equality.

King led the 1955 Montgomery bus boycott and later became the first president of the Southern Christian Leadership Conference (SCLC). King helped organize the 1963 March on Washington, where he delivered his famous "I Have a Dream" speech on the steps of the Lincoln Memorial.

King was posthumously awarded the Presidential Medal of Freedom and the Congressional Gold Medal. King’s life is a true reflection of his commitment to peaceful protesting, equality, and social justice.

The King family has a long history in Atlanta and has greatly contributed to Atlanta communities and neighborhoods. Specifically, King lived and spent most of his childhood in the Sweet Auburn District. The King family has influenced multiple historic Black neighborhoods and communities around the country. Martin Luther King Sr. was the Senior Pastor of Ebenezer Baptist Church.

A graduate of Morehouse College, and a member of Alpha Phi Alpha Fraternity Inc., King Jr. is best known for advancing non-violent, civil rights through nonviolence and civil disobedience. King’s teachings were inspired by his Christian beliefs and Mahatma Gandhi’s nonviolent activism.

MLK Jr. Day is a great opportunity to jumpstart anyone’s research on the iconic leader. The campaign for a federal holiday in King's honor began soon after his assassination in 1968. President Ronald Reagan signed the holiday into law in 1983— first observed three years later and officially observed in all 50 states in 2000. Hundreds of streets in the U.S. have been renamed in King’s legacy and honor. The Martin Luther King Jr. Memorial on the National Mall in Washington, D.C., was dedicated in 2011.

This conversation with sex researcher and therapist, daughter of Atlanta civic and political leader, John Wesley Dobbs, and childhood friend of Dr. Martin Luther King, Jr, the late Dr. June Dobbs Butts will explore Dr. King's early formative years in Atlanta. This discussion was moderated by Georgia State University's Dr. Maurice Hobson, author of The Legend of the Black Mecca: Politics and Class in the Making of Modern Atlanta, opens a new window.

ONE DAY IN JANUARY WITH PHOTOGRAPHER HORACE HENRY

Photographer Horace Henry discusses his experience taking photographs at the first memorial services for Dr. Martin Luther King, Jr. Henry, a student from Clark Atlanta University, was plucked from the hundreds of people in the crowd outside of Ebenezer Baptist Church, and led to the "media pit" where he captured one of a kind photos of Coretta Scott King, Harry Belafonte, and others.

Africana Virtual Storytime presents the scope and breadth of AARL’s collection of illustrated Africana children’s literature - empowering educators, parents, and caregivers with the resources and skills to share stories of the diasporic Black experience with children.

The Andrew J. Young Papers document his career and family life spanning more than 50 years, including his positions as a minister, civil rights activist, Congressman, Ambassador to the United Nations, Mayor of Atlanta, Co-Chair of the 1996 Atlanta Committee of the Olympic Games, and his involvement with Law Companies Group, Inc. and GoodWorks International.

Minutes and agendas, scrapbooks, photographs, reports and historical writings, printed material and ephemera, personal papers, books, and artifacts are the elements of Reverend Williams Papers. The material documents the history and reflects the activities of Williams during the Civil Rights Movement, his political career, his business ventures, and the history of his involvement in several organizations including the SCLC. The collection also contains history and information on Hosea's Feed the Hungry and Homeless.

Also included are photographic materials that document the history and reflect the activities of Williams during the Civil Rights Movement, his political career, his business ventures, and the history of his involvement in several organizations including the SCLC.