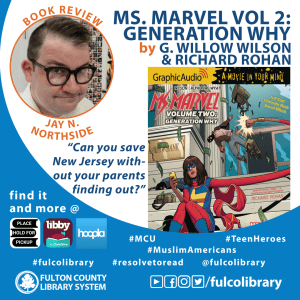 Like a Peter Parker across the Hudson, Kamala Khan is both a masked defender and a struggling teen trying desperately to keep two lives separate, but they’re always colliding. “My New Normal is No Normal”

Previously on Ms. Marvel—A Jersey City teenager develops superpowers after being engulfed in a strange mist. Kamala is suddenly able to enlarge, or “embiggen”, herself. Either her whole body or just part of it. Say, a giant fist! She can also superhumanly heal. Before she can begin to deal with it she runs into trouble where she’s the only one around who can help. With great civic pride comes great responsibility and Kamala believes she has to use these new powers to protect JC, as the Avengers don’t cross the river from Manhattan very often. Her idol Carol Danvers recently changed her identity to Captain Marvel, leaving the “Ms.” title up for grabs…

Now a few weeks later Kamala is doing her best to keep her new activities secret, especially from her strict Pakistani parents. Her friend and confidant Bruno, a clerk at the Circle Q, is the only one in on it, and lets the store serve as Ms. Marvel’s HQ/quick-change station. Heroes can’t help but attract the attention of villains and she’s soon being targeted by The Inventor, a strangely-birdlike man setting little destructive robots loose on the city. BUT…that’s only the start. A chance encounter with Wolverine reveals a series of teenagers disappearing. And a fight that nearly overcomes her brings the aid of some unearthly beings with information about what and who Kamala really is.

This adaptation of the Marvel comics by GraphicAudio is more than an audiobook. With a full cast, sound effects and narration from Kamala the space left by the images is filled in surprisingly well. Like 1940s Superman radio dramas, the mind is invited to see it all. Writer G. Willow Wilson provides Kamala with a rich supporting cast so, like all good comics, the stories are never just about a threat. Kamala is at the point where she has to prove to herself that she can take it, AND prove to her peers that her generation has a lot to give to the world. Plus, of course, she’s going to have to admit that no one can it all alone. Sometimes you need a dog. A very large dog. From space.

This GraphicAudio recording is available on Hoopla, along with other audio adaptations and many more Ms. Marvel comic books! Kamala is highly recommended, whatever format you choose.

Check out Ms. Marvel: Generation Why on Hoopla or Libby, with your library card today!