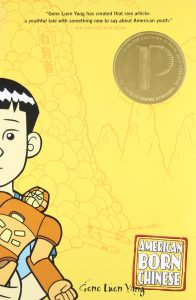 Jin Wang feels like an outsider at school, the only Chinese-American student there; the Monkey King, lord of all the Monkeys, rises too far, too fast and faces retaliation from the other gods; teenager Danny is at his wit’s end dealing with the yearly visit of his cousin, Chin-Kee, who personifies the perfect negative stereotype of the Chinese. Yang brings these three very separate stories come together to illustrate the experience of a Chinese-American boy growing up in a place that is not always very welcoming to his real and perceived differences.

Graphic novels lend themselves to “issue” books better than most genres, because the underlying issues can be lightened by the format and seem less “preachy.” This book is the perfect example of that: what would normally be a fairly tough topic to discuss (racism) is done in such a comic manner that it goes down better. There is an underlying strain of melancholy in the book; no one ever has a happy ending, but characters come to a better understanding of themselves and others. Chin-Kee would be problematic in any other story (and may still be for some readers), but the “laugh track” that accompanies his actions makes it clear that he is meant to be a representation of all the “worst” traits that westerners view of the Chinese. At first the reader won’t understand why Yang keeps shifting among these three different stories, but when he brings them together it has an impact that makes you go back and read it again, to pick up what you missed. A must read for anyone who ever felt like they didn’t fit in.

This book is available virtually with FCLS as an ebook in Overdrive.