Book Review: Ancient Egypt, by Anthony Holmes, Part of the "History in an Hour" Series 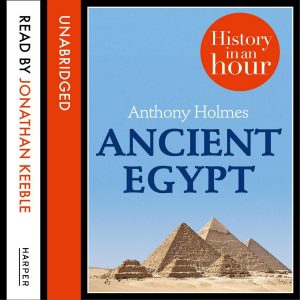 For those who want to know more about history but don’t know where to begin, the "History in an Hour" series is an answer to their prayers. In about an hour (or a little more) the listener will come away with a good basic understanding. In the Ancient Egypt title it begins with a series of interesting questions, including “How did Egyptians maintain a stable society for such a long period of time?” “What legacy did they leave behind?” “What revelations are still left to be found for archeologists in the desert sands?”

Focusing on some famous subjects, including the Sphinx, hieroglyphics, King “Tut” and mummies, immediately ups the entertainment quotient. Sprinkled throughout are lesser known tidbits. For example, the belief that a Napoleon army cannonball blew off part of the Sphinx’s missing nose is quickly debunked or that the term “mummies” comes from the mistaken belief that they were preserved with “mumia” a plant resin. This trivia helps make the minutes fly by and leads this survey to an entertaining and satisfying conclusion.