Book Review: As You Wish: Inconceivable Tales From the Making of The Princess Bride, by Cary Elwes 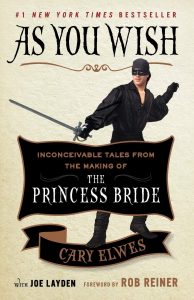 Have you ever wondered what goes on behind the scenes on the set of your favorite movies? Does the cast really get along? Were there any close calls or funny mishaps? In As You Wish: Inconceivable Tales From the Making of The Princess Bride, Cary Elwes, aka Westley, lets you in on all the gossip. He shares his memories along with special guest appearances by Robin Wright (Buttercup), Chris Sarandon (Humperdinck), Billy Crystal (Miracle Max), and many others.

The audiobook for this title as it is narrated by the cast and crew of the movie, and they do an excellent job. As the main author, Cary Elwes narrates the majority of the book, and his voice is perfect for the task as he skillfully adds anecdotes about the cast and crew using his talent for impressions to add a special element. I only wish he would record more audiobooks! Robin Wright, Chris Sarandon, Billy Crystal and others narrate their own additions to the book which adds immensely to the fun and gives a well-rounded picture of the making of the film. Fans of The Princess Bride will not want to miss this listening experience. The audiobook and ebook can be found in OverDrive or the Libby app.