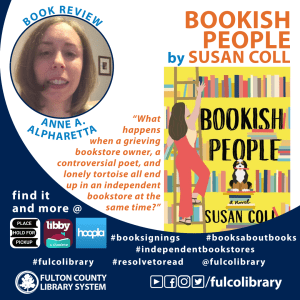 Looking for your next read? Check out Bookish People by Susan Coll, reviewed by Fulco Library staff, Anne A.

What happens when a grieving bookstore owner, a controversial poet, and lonely tortoise all end up in an independent bookstore at the same time? Chaos ensues. This novel tells that quirky and humorous story. Bookstore owner Sophie has recently lost her husband, and she is so disillusioned with the world that she dreams of moving into a secret nook in her store. Her events manager Clemi is an aspiring novelist who books the infamous poet Raymond Chaucer for a poetry reading and book signing. She believes he is her father and wants to meet him. Sophie wants the event canceled because of the scandal around Raymond’s wife’s death, but Clemi is reluctant to cancel because she wants to learn the truth of her parentage. Meanwhile Clemi and another coworker rescue a tortoise named Kurt Vonnegut, Jr from a pet store one night, but neither can have pets at their apartments, so they decide to bring Kurt Vonnegut, Jr. to work. With the combination of a loose tortoise and angry protesters, it is no surprise that Raymond’s book event does not go as planned; nevertheless, both Clemi and Sophie emerge stronger and more confident.

This book was not what I expected. It started slow and worked up to a sensational ending with Raymond’s book signing. It was funny, but not hilarious. Perhaps many of the literary references went over my head. If you like original books about booksellers, then this book is for you. However, if books about books are not your thing, then you may want to read something else.

Bookish People can be checked out at any Fulton County library. It is also available as an eBook and an audiobook on both Overdrive and Hoopla. Borrow it tonight and enjoy this crazy novel.

Check out Bookish People on Hoopla, Libby, or from your branch's shelves with your library card today!