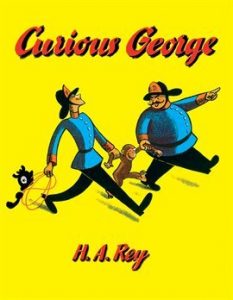 Everybody knows Curious George. There are numerous books, movies, and TV shows featuring him today, but do you know how this mischievous monkey got his start?  Curious George tells the story of how George came to America with the Man in the Yellow Hat. This story is available as a read-along eBook on Hoopla and an eBook on eRead Kids.

This first Curious George story was published in 1941. For that reason some parts may be shocking to modern readers. The Man in the Yellow Hat kidnaps George in Africa using his straw hat as a trap. George gets curious and tries on the hat which falls over his eyes.  At this moment, the Man in the Yellow Hat captures him and takes him aboard a ship bound for America. He plans to give the curious monkey to a zoo. Only in later stories does George live with him permanently. Once he gets to America, George’s adventures really begin. He goes to jail and floats over the city holding balloons.  Finally at the end of the book, The Man in the Yellow Hat leaves George at the zoo, but readers know he won’t stay there long.

If you want more Curious George stories, check out the large selection on Hoopla and eReadKids.  Both children and adults can relate to George’s accidental antics as he explores his world.

Be sure to borrow this amusing classic tonight!