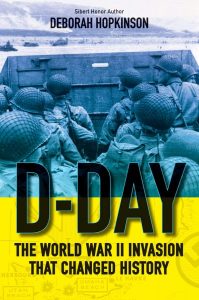 Synopsis: By spring of 1944, World War II had been raging for five years, but the Allies had not yet mounted a serious invasion of Europe to break the grip of the German hold on that continent. Finally, after months of planning, moving men and gathering equipment, it was time: D-Day had arrived. On June 6, 1944, the largest military invasion of its kind was undertaken to liberate Europe from the Nazis. Beset by weather problems, intelligence lapses, and German guns, it was nevertheless a success (at great human cost), and changed the course of history.

Review: I admit up front that I’m a history nut, so I love this book. But it’s written to make it readable for the non-history buff. Hopkinson uses the personal stories of soldiers, sailors and airmen (many of them were teens themselves). It’s less like a history lesson and more of a story of how to survive in war. D-Day was a very complex, and she simplifies it by focusing on the U.S. troops. She also puts a good deal of the “dry” history parts in the end, in a section called “Quartermaster’s Department.” Included at the end of each chapter are links for more information online. If you are interested in war history, this is a great place to start. Don’t let the length scare you off—a lot of that is diagrams, pictures, bibliography and notes (after all, it is non-fiction). Social issues: discussion of race relations and women’s issues in the armed forces.