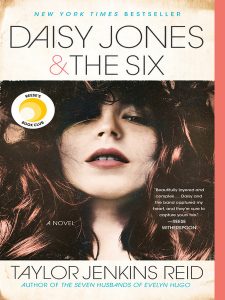 Every music lover from the 70s knows the band Daisy Jones & The Six, but the mystery of their breakup at the height of their popularity is a mystery. Their stunningly beautiful party girl of a lead singer, Daisy Jones, came of age in the sex, drugs, and rock ‘n’ roll era of 1960’s Los Angeles. By the time she meets Billy Dunne, lead singer of The Six, her voice is getting noticed as much as her looks. Put the girl and the band together and the chemistry is undeniable. And so are the heartbreaks, in-fighting, and backstage drama.

Told by the band’s fictional characters in documentary format, this tale of the rise and fall of one of rock’s most legendary groups will keep readers coming back for more, transforming you instantly to another time and place. Taylor Jenkins Reid gives each band member a distinct voice that will leave readers wishing this story and its music were truly part of American rock ‘n’ roll history.