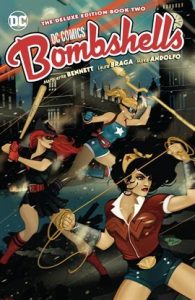 As a DC universe secondary characters fan, I was excited about the DC Bombshells series. DC Bombshells is an alternative telling of World War II that follows the exploits and battles of DC female superheroes and villains who are active participants in the war.

Amanda Walker heads a task for the Allies called the Bombshells made up of Super Heroines and Villains such as Wonder Women, Zatana, and Harley Quinn. One unique set of characters is the new Batgirls, teenage vigilantes keeping immigrants safe in Gotham City while Batwoman is away with the Bombshells.

The Axis powers will have their crew of super-powered women such as Killer Frost and the Jokers Daughter.

Each volume focuses on a specific set of characters and theater of war. The art style for Bombshells is a satisfying blend of the characters' current costumes and backstories with pin-up and Dieselpunk aesthetics.