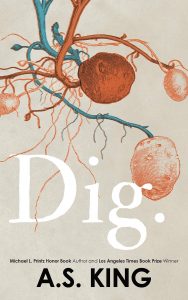 Winner of the 2020 Michael L. Printz Award, Dig. by A.S. King is an ambitious narrative that examines the lasting consequences of white privilege on a generation of teenagers estranged from their family and ignorant of the tangle of secrets that bind them together.

Descendants of Pennsylvania potato farmers, antagonistic Marla and hapless Gottfried Hemmings have built their life on their belief in what is “decent.” But they have kept their wealth—and their secrets—to themselves, resulting in five lost and wandering teenagers, known to readers as the Shoveler, the Freak, CanIHelpYou?, Loretta the Flea-Circus Ring Mistress, and First-Class Malcolm. Lonely and unknown to each other, they seek answers to their questions in their own way: by shoveling snow, by dealing drugs, by training the fleas that live in their doublewide trailer, by visiting Jamaica between their father’s cancer treatments, and by “flickering” in and out of existence.

Equal parts surreal and blisteringly honest, Dig. explores how five very different teens grapple with the privileges and shortcomings they’ve inherited, and their quest to fix what feels broken inside them.

But how do you get to the root of the problem, the source of decades of hurt, prejudice, and injustice? You dig.

Available in eBook or audiobook on Overdrive and Libby.