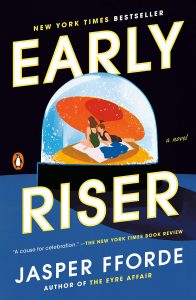 I didn’t know it was coming. I hadn’t heard anything. It came to my library hidden among the new releases and, slyly, it slipped by me, until it surprised me, sitting proudly on the shelf – big white and yellow letters: Early Riser, Jasper Fforde. Clutching it selfishly I went directly to our circulation desk to check it out with my library card. I hid it at my desk like purloined pirate gold, barely able to wait until I got home to start reading.  I am an experienced librarian. It’s not every day that I behave this way; but, it’s been a while since we’ve gotten a new book from Jasper Fforde.

Since The Eyre Affair, Fforde’s first book, which I absolutely loved and which inaugurated the excellent Thursday Next series, until 2014, when Fforde went on a “creative hiatus,” Fforde regularly produced imaginative and reliable serial fantasy for YA and adult audiences. Early Riser marks Fforde’s triumphant return to full-force, adult science fiction, and it is a standalone novel, not a work in a series, which is an exciting development: like a crafted snow globe, Fforde gives us an entrancing, self-contained world. In the time of sprawling epics like Game of Thrones, it’s good to read sci-fi that feels complete in itself and tied off at the right time.

Early Riser takes place on an alternative Earth: modern, but with Ice-Age winters. In order to survive the annual deep-freeze, the human population hibernates en masse through winter, like bears in giant, nuclear-powered dormatoriums. The protagonist, Charlie Worthing, is a new “recruit” to the Winter Consul Service, the intrepid but short-lived few who are tasked with ensuring humanity’s survival through hibernation. Winter is dangerous: there are monsters, villains, and even cannibal undead among the snowy, desolate wastes. Some go to sleep and never wake up.  Dreams are dangerous. Someone has to stay awake to protect us.

Metaphors of sleeping, waking, and dreaming abound in Early Riser, which helps the novel feel both perennial and timely. Fforde’s signature skill at world building is as effective as ever.  Early Riser feels thoughtful and grown-up, more erudite, less slave to fashion. Its economy of concept insulates it from feeling played-out or dilute, and Fforde’s fresh, hyperrealist wit keeps the story warm, engaging, and funny, even as he gives us a dead-serious parable of climate change and permanent wealth inequality. I found Early Riser to be vastly enjoyable. Recommended for adult readers and fans of science fiction.