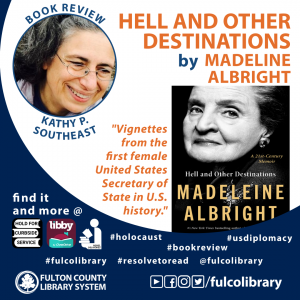 Looking for your next read? Check out Hell and Other Destinations: A 21st-Century Memoir by Madeline Albright, reviewed by Fulco Library staff, Kathy P.

Albright served as the first female United States Secretary of State in U.S. history from 1997 to 2001 under President Bill Clinton. She has written six earlier books about her remarkable life and her experiences in the State Department. Of all the sometimes kooky stories in this book, none was so surprising as her discovery of her maternal grandmother's diary, who died in the Holocaust. It is reproduced in this book. Albright had not even known of her heritage until a reporter discovered it in 1997. The failure of the Third Reich, says Albright, became one reason she finds it "impossible to be cynical".

And cynicism could be expected from one who has seen so much. Speaking of her father's work at the United Nations on Kashmir, Albright says "Now he is dead, I am old, and the tensions are more dangerous than ever." Her grandmother writes in the newly found diary, "a person lives all the time with one foot in the grave". But though things may seem dim, Albright specializes in finding a path out of the gloom. Her writing is uplifting.

Check out Hell and Other Destinations on Libby, or from your branch's shelves with your library card today!

Hell and Other Destinations

Hell and Other Destinations eBook

Hell and Other Destinations eAudiobook