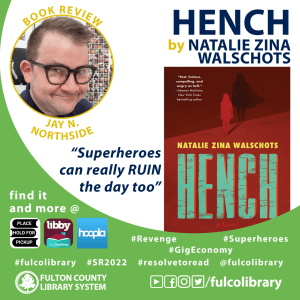 Looking for your next read? Check out Hench by Natalie Zina Walschots, reviewed by Fulco Library staff, Jay N.

In an unnamed city, we meet people who are just getting by in a gig economy. But these crummy jobs are for supervillains. “Henching”. And getting a full-time position and benefits with these guys isn’t too easy. Villains aren’t made of money, you know. They’re mostly just startups renting office space anyway.

In this straight-facedly ludicrous world of “The Incredibles” and “The Venture Bros” our navigator is Anna Traumedlove. An acerbic young woman with more talent and spite than opportunities. Think 90s Parker Posey. Or Daria. (Ask your mom) Anyway at the hench temp agency, the worst job fair/casting call ever, Anna gets a gig that could *possibly* be long-term, working on spreadsheets at the office of Electric Eel. The touchy-feely “E” asks Anna to be part of his “press conference” (ransom video) (in a rented hotel ballroom) when one of the city’s many heroes shows up to save the kidnapped son of the mayor. In the midst of Supercollider trouncing the Eel’s goons, and R&D department, Anna gets nudged out of the way.

That is to say, Anna’s leg gets spectacularly broken after she flies across the room. Then her contract is terminated. Then she’s evicted. Unable to do much more than stew on her friend’s couch she turns to where she feels at home–spreadsheets. Rather than “Why me?” she begins to wonder “How many others?”, and starts crunching numbers. What is the cost of superheroes? The cost in property damage. The cost to public health. Encountering a superhero is basically encountering a tornado, all reasonable people can agree. Are they worth it?

Faced with a very, very long recuperation, Anna starts an anonymous blog calling out the capes with hard numbers. Her friend is super-annoyed with her obsession (and conspicuousness, VPN or not) but Anna can’t let her meager grip on sanity and self-respect go by dropping the matter. She starts to get noticed. And *then* she gets an opportunity. What would it take to make a cape lose it? To become the most embarrassing thing on the internet. A hilarious disgrace memed into oblivion. How much damage can data (and gossip, lots of gossip) do? The Joker once said all it takes is one bad day to crack a hero. Anna wants to make sure it’s on a livestream.

Natalie Zina Walschots has written a hilarious, incisive, angry and very sympathetic story about hitting bottom before discovering that allowing yourself to be yourself and doing what you’re good at is the real path to success. Even if it’s being really mean to superheroes.

Check out Hench on Hoopla, Libby, or from your branch's shelves with your library card today!