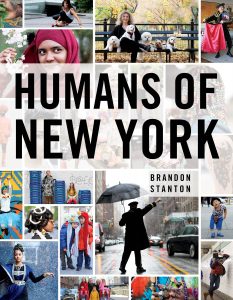 Many are familiar with the popular blog "Humans of New York," but probably not many know that its founder, Brandon Stanton, is from Georgia and went to school at UGA. His photographs, which he started taking in 2010 just out of his fascination with the diversity of New York City, quickly became a commentary on the soul. There's a young man dressed entirely in black, holding a smoothie. Stanton's caption: "Even the smoothie was black". A young lady with two pigeons eating from her arms, captioned "The pigeon whisperer". A man in coat and hat, Grand Central Station, his head resting on one hand giving his face a hint of a smile, but captioned: "My house blew into the ocean". This book contains 400 of the photos with little vignettes about their subjects that will make you absolutely love humanity.