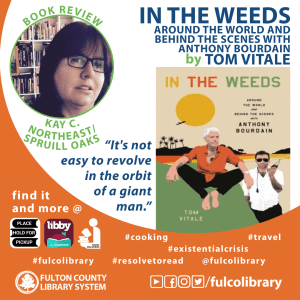 Looking for your next read? Check out In the Weeds by Tom Vitale, reviewed by Fulco Library staff, Kay C.

Like many people with an interest in food, travel and pop culture, I was a fan of Anthony Bourdain’s writing and took his self-inflicted passing in July 2018 like a gut punch. I never met the man and yet it felt like a personal loss in a way that few celebrity deaths do and not just because it was at his own hand, though that is a factor

Bourdain’s passing was a complicated mourning in that that as much as I enjoyed his contrarian writing I didn’t know if I would like the actual man. There was a blustery edge to him that always rubbed me wrong – but one that I also enjoyed. Still, I read everything he wrote and caught his shows as I could. For me, a fan from afar, it was a “separate the art from the artist” kind of relationship. For Tom Vitale - the director, producer and/or editor of approximately 100 of Bourdain’s TV episodes spanning four separate series and nearly a decade of time - it was a similar relationship, only for him there was no distance to provide perspective. Together they lived and worked deep in the trenches for more than a decade. In the Weeds is his meditation on his experiences and emotions revolving around the personality giant that was Anthony Bourdain.

Together with a tight team they spent thousands of days on the road, moving from the highest of luxury experiences to the absolute opposite in active war zones. The men had a bond like war buddies and yet, Vitale’s relationship with Bourdain over those many years was conflicted. Vitale believes that Bourdain’s m.o. was to size up people and play them in the way that got whatever reaction he wanted at a given time. In the case of Vitale, Bourdain liked to keep him off balance, to belittle him at turns and to alternately serve praise as it fit his needs. Coming to terms with that relationship is at the heart of In the Weeds.

The book provides lots of great behind-the-scenes stories that will delight any fan of Bourdain but may also disappoint those who put him on a pedestal. This kind of complicated personality is what makes for interesting people and there is no denying that group is where Bourdain was at home.

Check out In the Weeds on Libby, or from your branch's shelves with your library card today!

In the Weeds eBook