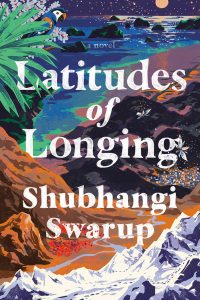 Latitudes of Longing, by Shubhangi Swarup, is a collection of interconnected short stories ranging across the subcontinent of South Asia, from the Andaman Islands to the Himalayas. This beautifully written debut novel makes use of magical realism, history, and scientific research to describe love in its many forms—romantic, familial, fraternal, as well as for the earth itself. While the writing throughout is exquisite, the stories themselves are not equally engaging. The first tale, relating a marriage between a scientist and a woman who sees ghosts, was by far my favorite, containing surprise bursts of sly humor and linking back up with the final story in a charming way. Some of the stories are less substantial and don’t contribute much to the completion of the circle, but on balance I found most of them enjoyable and often moving.

This book reminded me of the Pulitzer Prize winning novel, The Overstory. Latitudes of Longing is more lighthearted and without the activism of the former book, but is similar in its lyrical descriptions of the natural world (which figures prominently enough to be considered an additional character), and in the connections the disparate characters make in one another’s lives. Readers might also enjoy The Tsar of Love and Techno by Anthony Marra and Life of Pi by Yann Martel.