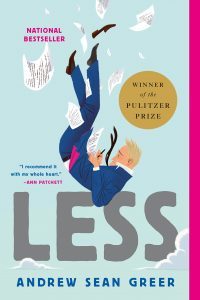 A virtual “Hello” to all of our patrons at home! I’m Mary Clarendon Inman, Branch Manager of the Metropolitan Library. I recently read Less, by Andrew Sean Greer, a National Bestseller as well as the winner of the 2018 Pulitzer Prize for Fiction. Copies are available to check out now in Overdrive/Libby.

Arthur Less is staring his 50th birthday in the face. “And at fifty, Less muses drowsily, you’re as likable as you’re going to get.” A middle-aged writer who has never managed to find the literary recognition he desires, he is also facing the impending wedding of a former young lover. To attend the wedding would be too painful, but to decline shows weakness. The answer to his problem? Accepting low brow literary invitations to events around the world. Arthur has always felt “less than” amongst his peers, still, these invitations seem like a much better idea than staying home to dwell on the fact that he is alone and his publisher has just denied his latest manuscript.

As Arthur Less sets off on his travels it becomes clear with each chapter that anything that could go wrong, absolutely will. His favorite, and much discussed, blue suit is eaten by a stray dog. While reviewing Japanese cuisine for a men’s magazine, he becomes trapped behind a 400-year-old door, his only option for escape breaking through a paper wall. A late-night tryst ends with him falling out of a window.

Characters are brought to life through numerous flashbacks and humor is found in the delightful snafus of navigating the literary set. Tension is only heightened by the fact that the story of Arthur Less is told by a mysterious narrator who is only revealed in the final pages.