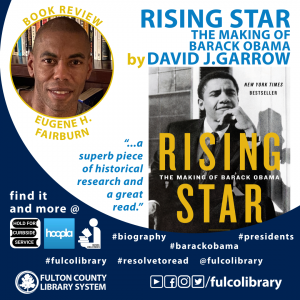 Looking for your next read? Check out Rising Star: The Making of Barack Obama by David J. Garrow, reviewed by Fulco Library staff, Eugene H.

The first chapter is a stunning display of historical research presenting a complex, multi-layered account of early 1980’s Chicago. The author then settles into a more conventional biographical account detailing Obama’s formative years in Honolulu and Jakarta, his undergraduate college years at Occidental College and Columbia University and his subsequent career as a community organizer in Chicago.

Much of the book is spent detailing Obama’s political career from his successful campaign for state Senator, his failed run for a seat in the US House of Representatives to his successful run for the United States Senate. The book’s narrative culminates in Obama’s decision to pursue his historic run for the Presidency. An epilogue follows, where Garrow assesses Obama’s Presidential performance and political impact.

Rising Star is a superb piece of historical research and a great read.

Check out Rising Star: The Making of Barack Obama on Hoopla, or from your branch shelves with your library card today!