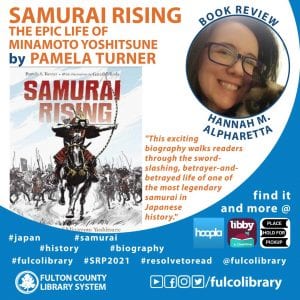 Looking for your next read? Check out Samurai Rising: The Epic Life of Minamoto Yoshitsune by Pamela Turner, reviewed by Fulco Library staff, Hannah M.

Minamoto Yoshitsune’s legendary tale is told for young readers by Pamela Turner. Yoshitsune, who was born in 12th century Japan and was a military commander of the Minamoto clan during the late Heian and early Kamakura periods. When the Genpei War (1180-1185) broke out between the warring factions of the Taira and Minamoto families, it was Yoshitsune who helped his brother, Yoritomo, consolidate power and become the first shogun of Japan. His story became famous and is told by the epic poem Tale of the Heike and Gikeiki (“Chronicle of Yoshitsune”), where he is depicted as a tragic hero. Yoshitsune’s life is often dramatized in many art forms as well, where he continues to be immortalized through stories.

It is hard to separate historical fact from legend, but Pamela Turner offers a firm history of Yoshitsune’s epic life. Tales of adventure, archery, sword fighting, and secrets await the reader from the moment they begin. Full of action and intrigue, betrayal and loyalty, Samurai Rising is an exciting biography of one of the most famous and legendary Japanese historical figures.

Check out Samurai Rising: The Epic Life of Minamoto Yoshitsune on Hoopla, Libby, or from your branch's shelves with your library card today!