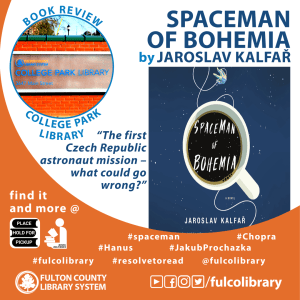 Looking for your next read? Check out Spaceman of Bohemia by Jaroslav Kalfař, reviewed by Fulco Library staff at the College Park Library.

"Spaceman of Bohemia" is an interesting debut novel by Jaroslav Kalfar. Soon to be a Netflix movie starring Adam Sandler, it covers the mission to Venus by scientist Jakub Prochazka, the first astronaut from the Czech Republic. Why does the Czech Republic have an astronaut? Because all other space agencies have decided that the eight-month mission to Venus is probably a suicide mission and don't want to endanger their astronauts.

An unknown comet enters the milky way, trailing a dust cloud behind it. The dust cloud settles between Earth and Venus. The dust particle cloud causes the night sky to turn purple rather than black. Scientists name the anomaly "Chopra" and want samples, but only the Czech Republic intends to attempt a mission to the dust cloud to increase their status as a country.

Once he starts the mission, he keeps in touch with his wife, Lenka, and his mission controller, Petr, through video chats. After a couple of months, Lenka does not show up for her video chat and does not want to wait for Jakub to return. Petr does his best to keep Jakub's spirits up, but soon Jakub becomes aware of something inside the spaceship with him.

It is a sizeable spider-like creature that Jakub refers to as Hanus. Hanus eats Jakub's Nutella snacks and gives him pep talks. Since Petr and ground control do not detect Hanus's presence, the question is whether he is real or a figment of Jakub's imagination.

Once he arrives at the Chopra cloud and starts collecting samples, fragments of the dust cloud invade his spacesuit and even the spaceship. Is Jakub doomed? Without revealing any spoilers, the story continues. Is what is happening real or Jakub's imagination?

This is an exciting, quirky, science-fiction read. I am looking forward to seeing Netflix's movie and its take on the book. An intergalactic odyssey of love, ambition, and self-discovery. This astonishing novel is witty, funny, and melancholy and meant to be read by book lovers like myself.

Check out Spaceman of Bohemia from your branch's shelves with your library card today!