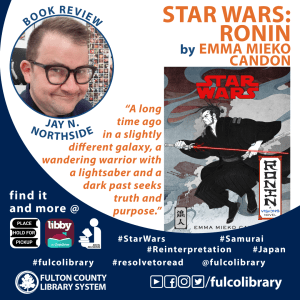 Astromechs. Lightsabers. The Force. An emperor. They’re all here. Shuffled. Translated. Remixed. Building on the animated short “The Duel”, part of the Star Wars: Visions series of original stories created by Japanese animators seen on Disney+, Emma Candon begins with the existing story of the mysterious man apparently hunting down Sith one by one, and his confrontation with a vicious warrior commanding a pack of bandits terrorizing villages. But he is no Jedi, his blade is also red. He is a ronin, a samurai without a master, a man without a home, who has apparently forsaken the Sith and now cuts them down.

Candon then takes us into the rest of the story. Unlike Star Wars prequels, which one way or another lead to a known event, “Ronin” makes us wonder. There’s apparently been a war…but the Jedi are part of the empire? Is this empire, you know, not evil? Who are the Sith in this universe then? They do seem to be villainous, but the story’s unclear. And none of the characters are giving up any secrets easily, to us or each other. The Jedi are a force of order, yet here they mirror the soldiers of feudal warlords and may have strayed far from the light. People think of them as the “good” Force people but, whether or not we trust the titular ronin, they don’t seem that trustworthy either.

Hanging over everyone is a history of witchcraft and obscenities borne of the Force from a malevolent being—some think her dead, some believe she never existed…or simply want to believe that. The ronin, and others, are now on a quest to find this truth. People looking for truth, closure, satisfaction, and perhaps a reason to allow themselves to die. The Visions universe is a refreshing look at what Star Wars is about, while playing with what it usually looks like. There’s hyperspace and blasters, but also tea houses and kimonos. It is authentically Star Wars, distinctly Japanese.

Check out Star Wars: Ronin, A Visions Novel on Libby, or from your branch's shelves with your library card today!