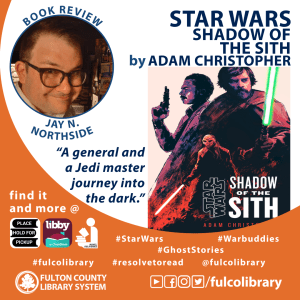 Looking for your next read? Check out Star Wars: Shadow of the Sith by Adam Christopher, reviewed by Fulco Library staff, Jay N.

“I know, I was with him. Luke and I were tailing an old Jedi hunter, Ochi of Bestoon.”

This exchange from “The Rise Of Skywalker” may have seemed an odd way to bring Lando Calrissian into the story. What would he have been doing on some quest with Luke? Well, that’s what Adam Christopher is here to tell us. They were allies, central to the events of “Return Of The Jedi”, but we never saw them simply knowing each other. A seemingly odd couple makes for an enjoyable story, broadening our understanding of these forty-something war heroes.

The events of “Rise” provided the answer to Rey’s history, using elements of the previous two films and tying her into the main thread of the Skywalker saga. Left behind, yes, but to keep her safe. Her parents stalked by the remnants of the Sith and the Emperor because she is in fact his granddaughter (or daughter of a clone anyway)! Audiences saw her parents’ fate and what became of Luke’s Jedi temple and training Ben Solo, and even where Lor San Tekka ended up.

There’s a grim inevitability here. But a good writer can make a good story even if you already know the ending; can create suspense even if you know it’ll end in tears. A dread hangs over this story, but it’s compelling nonetheless to follow the twisting path. A haunted, down-on-his-luck Lando, searching for a daughter stolen by the First Order, overhears a certain Ochi talking about a job he’s been given by the Sith to kidnap a girl. “The SITH?!?” As far as anyone knows they’re extinct. Hurting from his own fruitless search, he knows he must contact his old friend Luke if this evil really is still out there.

Throughout the travails of the doomed family on the run and the attempts by our heroes to save them, there is a welcome informality to writing. Realistic dialogue both inner and outer. The space provided by a novel lets characters live, breathe and think to themselves. The audiobook performance by William DeMeritt further enriches this. There is plenty of humor and Christopher has some fun bringing an obscure 1980s toy into The Canon. But along with light is the dark and we go to quite sinister places as followers of the dark side, both living and dead, seek to manifest their domination.

“Shadow of the Sith” does a remarkable job of providing a backstory to the sequel films as well as carrying forward lore and events from previous novels. One plot connection is a little too convenient, but forgivable. Like the first trilogy, the third one was a bit made up as it went along, yet this story ties it all together with a deft touch and a warm, human voice. And who doesn’t like to hang out with Lando?

Check out Star Wars: Shadow of the Sith on Libby, or from your branch's shelves with your library card today!

Shadow of the Sith