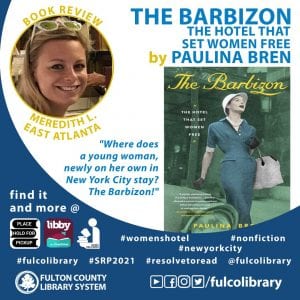 Looking for your next read? Check out The Barbizon by Paulina Bren, reviewed by Fulco Library staff, Meredith L.

In the early twentieth century, the Barbizon Hotel was one of the few reputable places a young woman could stay if she had decided to leave the home and try her luck as a “career woman.” Ford Models, Katherine Gibbs Secretarial School, and Mademoiselle magazine all housed their girls there. From Mademoiselle summer interns like Sylvia Plath to the “unsinkable” Molly Brown of Titanic fame, this is where women wanted to be when living in New York City on their own.

This brand-new nonfiction book details the entire life of the hotel from its opening in the roaring twenties through its decline in the eighties and its eventual transformation into luxury condos. Learn about the various residents and how the Barbizon transformed their lives at a time when single women weren’t supposed to be out on their own. This is a fantastic read for anyone interested in New York City or how life for women has changed drastically in the last one hundred years.

Check out The Barbizon on Libby, or from your branch's shelves with your library card today!