Book Review: The City We Became by N. K. Jemisin 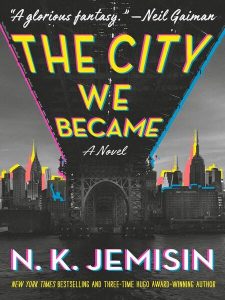 They say, “Don’t judge a book by its cover,” but I often do. Maybe I shouldn’t…The City We Became by N. K. Jemisin has a cover that doesn’t do justice to the lyricism and emotional depth of its contents.

The city is New York, and its awakening avatar - a young homeless street artist - fights off the first attack of a Lovecraftian foe intent on keeping the city unconscious. The aftermath of the battle leaves New York still under attack, but personified by the avatars of its five boroughs: Manhattan, Brooklyn, The Bronx, Queens, and Staten Island, who must rescue the injured New York.

As each intimately-drawn borough discovers the others and what is at stake, they race to find each other and marshal their new powers against the enemy intent on New York’s destruction.

Often frenetic, but with subtle attention to detail, city dwellers will recognize the boundless diversity, specificity of place, and mysterious wonders of urban life deified in this first in a trilogy (I hope Chicago is next!). For fans of Neil Gaiman’s American Gods, Nalo Hopkinson’s Brown Girl in the Ring, Nnedi Okorafor’s Who Fears Death, or Ben Aaronovitch’s "Rivers of London" series.

EBook and eAudiobook copies have long waiting lists, but when we start curbside service in July you could get a copy sooner, so place a hold now.