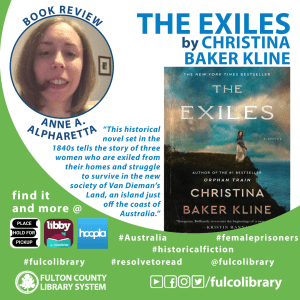 Looking for your next read? Check out The Exiles by Christina Baker Kline, reviewed by Fulco Library staff, Anne A.

This historical novel set in the 1840s tells the story of three women who are exiled from their homes and struggle to survive in the fledgling society of Van Dieman’s Land, an island just off the coast of Australia. Today it is called Tasmania. Evangeline is a naive and sheltered governess who is seduced by her employer’s son. She is accused of stealing a ring he gave her and sent to Newgate Prison. Pregnant and alone, she is sentenced to serve her time in the new penal colony of Australia. Aboard the prison ship, she meets Hazel, a young midwife accused of stealing a silver spoon. The two women become friends and learn valuable lessons from each other. Meanwhile in Australia Mathinna is a young Aboriginal orphan who the governor’s wife takes in to “civilize.” As Mathinna learns the ways of the British, she finds her own culture is slipping away. She also realizes that no matter how hard she tries she will never fit in to colonial society. All three women’s lives become linked together as they make lives for themselves in this new and challenging world.

I found this novel fascinating. I knew Australia was originally a penal colony, but I didn’t know they sent women there as well as men. I learned many things about life colonial in Australia including how poorly female prisoners were treated. Some readers may argue that Hazel’s story ends too neatly, but I think after everything she suffered her character deserves a happy ending. Likewise some readers many believe that Mathinna’s story ends too abruptly, but unfortunately I think it’s quite realistic given her situation and the time period. Overall this book is an interesting read about early Australian life.

The Exiles is available to be placed on hold and checked out at any Fulton County Library System branch. It’s also available as an eBook and audiobook on Overdrive. Borrow this riveting novel tonight and explore a forgotten piece of history.

Check out The Exiles on Hoopla, Libby, or from your branch's shelves with your library card today!