Book Review: The Fountains of Silence, by Ruta Sepetys 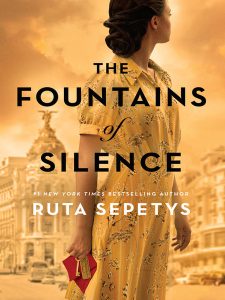 The year is 1957, and Daniel Matheson finds himself in Madrid, Spain with his family hoping to connect with his mother’s heritage and learn the family business from his oil executive father. This is post-Civil War Spain ruled by dictator Francisco Franco. Daniel learns quickly that life in Spain is very different than life back home in Texas. Daniel is an amateur photographer, and as he spends his time taking photographs of Spanish life, he meets several friends along the way, including Ana, who opens his eyes to the harsh reality of life in Spain for people who are not American tourists.

Even though this is historical fiction, Ruta Sepetys writes in a way that makes it feel contemporary. Her descriptions of everyday Spanish life juxtaposed with the opulence of resort hotels that cater to foreign tourists highlights the disparity between those in power and those without. Sepetys includes a glossary of Spanish terms and historical information about Spain under the rule of Franco. The Fountains of Silence has received starred reviews from Publisher’s Weekly, School Library Journal, and The Horn Book, and has been named a 2020 Best Fiction for Young Adults selection from the Young Adult Library Services Association. It can be found on OverDrive and the Libby app in ebook and audiobook formats or put on hold and picked up via curbside service.