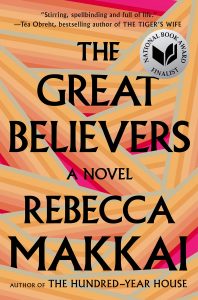 The Great Believers, a finalist for the 2019 National Book Award, follows two intertwined storylines—one in 1980s Chicago during the height of the AIDS epidemic, and one in present day Paris. The novel opens as Yale Tishman is heading to a wake for his best friend, Nico, who has died of AIDS. Yale deeply grieves the loss, but he is also grateful for his own health, the love of his partner, and a museum career which is taking off due to a surprise bequest.  However, within a span of weeks, the future Yale had eagerly been anticipating is wrecked, due to personal and professional betrayals. Fiona is a middle-aged divorcee whose only child will not speak to her.  The loss of her adored older brother Nico when she was only 17, as well as many of his friends in their close-knit group, has scarred her. She is in Paris trying to locate her estranged daughter and a possible grandchild, but must come to terms with all she has lost in order for love to re-enter her life.

Despite the tragic subject matter, ultimately this is a redemptive story about the power of love and the family you create when the one you’re born into lets you down. This novel portrays the devastation of the AIDS epidemic under the mostly indifferent eyes of the country, and poses an interesting contrast to the response to our current pandemic.

If you enjoy this book, you might also like Tell the Wolves I’m Home, by Carol Rifka Brunt, and A Place at the Table, by Susan Rebecca White. Thanks for following us here and watch for more posted recommendations.