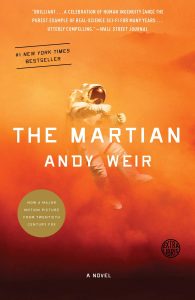 Let’s talk about The Martian. Andy Weir’s 2011 debut novel remains one of the best American novels of the last decade. Originally written in serial form online in consultation with a community of scientists, then self-published, it quickly found a broad audience and popular appeal. In 2015, The Martian was adapted into a feature-length motion picture, directed by Ridley Scott and starring Matt Damon. It tells the near-future tale of a Mars mission astronaut stranded by himself on another planet, and the struggle to bring him home alive. It’s a story of perseverance and survival, and it is a personal favorite of mine. This book helped me heal from one of the most difficult times in my life, when, long before the COVID-19 crisis, I had to face an extended period of extreme isolation.

Before I became your friendly, neighborhood librarian, I was a college professor. I took a job at a university in the third world. The school was far more remote than I had imagined, and when classes ended everyone in town left to work in the city or on farms; there was no work when the students were away. I found myself completely alone, a stranger in a foreign country, for months at a time. It was hard.

I found The Martian when I got back. It was like it was speaking directly to my experience of fear, isolation, and loneliness; but, critically, it also highlighted healthy coping strategies and emphasized the importance of having a positive mental attitude when facing adversity. The Martian is a futurist, science fiction novel, but it is also a novel of science. Its values are scientific. Andy Weir understands the value of working the problem, doing the math, knowing the risks, and being brave. It’s important to remember that these are American values as well. They are the values of our space program, of the brave souls that put a man on the moon and brought them back again.

I recommend this book at an unprecedented time in our nation’s history, when so many are suffering, not only because it has had such a profound impact on me, but because I believe that its message is universal and that it champions the best virtues of the human spirit, and because reading can offer solace in hard times because it reminds us that we are not alone.

Check out your public library’s digital collections! Free books and audiobooks on your device or computer!