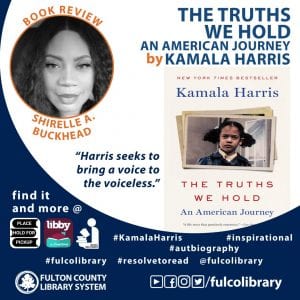 Looking for your next read? Check out The Truths We Hold: An American Journey by Kamala Harris, reviewed by Fulco Library staff, Shirelle A.

With her election to the vice presidency, her election to the U.S. Senate, and her position as attorney general of California, Kamala Harris has blazed trails throughout her entire political career. But how did she achieve her goals? What values and influences guided and inspired her along the way?

The daughter of immigrants and civil rights activists, Vice President Kamala Harris was raised in a California community that cared deeply about social justice. As she rose to prominence as a political leader, her experiences would become her guiding light as she grappled with an array of complex issues and learned to bring a voice to the voiceless.

It was a pleasure and inspiration to read “The Truths We Hold: An American Journey” Getting to know Kamala Harris through her autobiography was extremely inspiring. Like so many have admitted; before she ran for the presidency and to date became the first Black/Indian female Vice President of the United States I did not know she existed nor how she achieved so much in so little time. After reading her autobiography you will not only get to know Kamala Harris but understand and respect her and her journey to become the first of many.

Check out The Truths We Hold: An American Journey on Libby, or from your branch's shelves with your library card today!

The Truths We Hold

The Truths We Hold eBook

The Truths We Hold eAudiobook