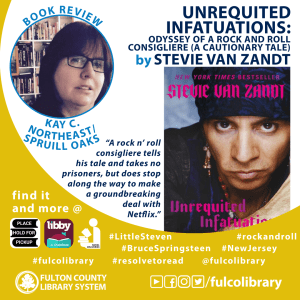 Looking for your next read? Check out Unrequited Infatuations: Odyssey of a Rock and Roll Consigliere (a Cautionary Tale) by Stevie Van Zandt, reviewed by Fulco Library staff, Kay C.

Miami Steve, Stevie Van Zandt, Little Steven…a man of many names, but also one of a clear defining aesthetic that has carried him through his many careers. From playing in garage bands alongside the men who would become The Boss and Southside Johnny, to his politically focused solo career with his band The Disciples of Soul that would lead to bringing the issue of Sun City in South Africa to many who had never before heard the word “apartheid” (I know. I was one when I bought the 12” single at 14 simply because the song rocked) to working with Finnish rock n’ roll legend Michael Monroe to resurrecting the career of soul great Darlene Love - even getting her to record her solo debut at age 70 - to building the Underground Garage empire on SiriusXM and on and on and on...The Consigliere of Rock and Roll was there. Oh, I almost forgot to mention his years on The Sopranos as Silvio Dante and his show Lilyhammer that was both the first original series on Netflix (though the internet seems to have forgotten this fact) and also the first co-production between US and Norwegian production companies. Did I mention that Little Richard presided over his wedding in 1982?

If you have any interest in the history of rock n’ roll, garage rock or soul music, SVZ’s autobiography Unrequited Infatuations is a book for you. I am a long-time SVZ fan but honestly not much of Bruce Springsteen fan, the man for whom SVZ is best known as a sidekick, and that’s just fine. There’s so more to Stevie than the E Street Band. It’s his sprawling style of garage rock blended with soul with a big focus on the horns that really works for me. And his acting. And his production work. And his radio channels (three and counting). And the unique, brutally honest perspective he brings to his writing and, really, to all his projects that sets him apart in an age where the popular move is to go with the flow and don’t risk upsetting anyone. Do what’s popular and non-controversial. Keep your head down. But not Stevie. Stevie tells his story, his way. He pulls no punches and, oh, what a story it is…

Did I mention TeachRock, his project to get musical education back into schools is running 20 years strong?

Check out Unrequited Infatuations: Odyssey of a Rock and Roll Consigliere (a Cautionary Tale) on Libby, or from your branch's shelves with your library card today!