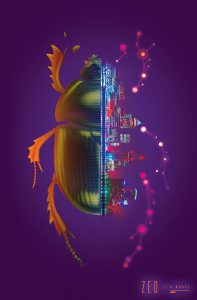 Science fiction’s job has always been to reflect on the present by imaging the future. In the old days, the sci-fi future seemed further away. We imagined flying cars and dome cities on faraway planets.  Joanna Kavenna’s new novel, Zed, is more apropos of the contemporary sci-fi, which is to say that the future is already somewhat arrived. We don’t need to trek into the deep future to imagine how it’s all going to go wrong. This is the science fiction of five minutes from now, the sci-fi of the very probable disaster, derived less from speculation than from the ordinary strangeness of realizing that the apocalypse has already happened.

The story hook for Kavenna’s tale imagines the coming global techno-corporatocracy, where Beetle, the mega-conglomerate apex-predator tech behemoth, rules the Western world through its fancy products, which ensure total surveillance of personal information, and its unbreakable algorithms, which ensure the total predictability of human activity. Your Beetle-band smartwatch, which knows everything about you, encourages you (or coerces you) to live a life of optimal efficiency and profitability. Everything is totally, unfailingly predictable, of course, until it isn’t. A man commits a heinous crime, a robot cop murders an innocent, and everything begins to slide sideways. What follows is partly a futuristic detective story al a Blade Runner, and partly an Orwellian morality play that examines the techno-horror of the digital surveillance state, our terrible obsession with consumption, youth, and beauty, and the complete narcissism and unforgivable depravity of the rich.

Zed is a serious book that manages to entertain throughout because of the masterful technique of the author. Kavenna knows how to turn a clever phrase, but also knows how to give absurdity its proper, poignant depth. She’s also world-class poetic investigator with a deep and sophisticated philosophical toolkit. We all know that it’s weird when a targeted ad seems to read your mind. We know that social media is oppressive but we participate anyway, fully happy to surveil ourselves in exchange for fleeting social capital. Voice activation doesn’t listen; it decides what we should have said. There are a million ways that we interact with the digital reality, but it’s rare that we slow down enough to understand the implications of it all. As a result, fiction today often engages with the anxiety-inducing aspects of our technological culture. The depth to which Kavenna explores these issues is noteworthy, and her insights are both cutting and profound. Recommended for adult readers, fans of science fiction and contemporary British literature.