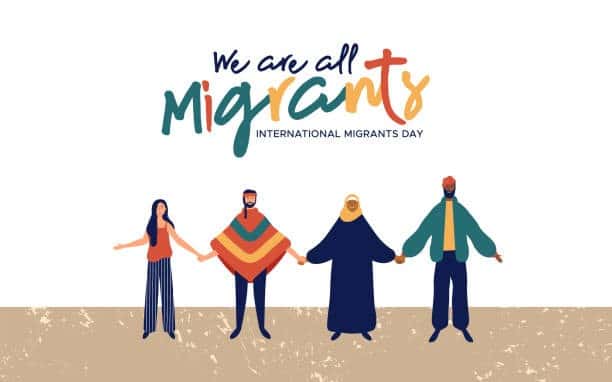 America is made up of migrants from all over the world. The country's diversity and wealth have made it a beacon of hope for those seeking a better life.  The positive impact of migration serves as inspiration for many.  Sergey Brin of Google fame, came from Russia. Madeline Albright, the first woman secretary of state was born in Prague, Czech Republic.  Elon Musk, founder of SpaceX, Tesla Motors, etc. was born in South Africa. Thai Lee, Chief Executive Officer of Software House International was born in Bangkok, Thailand.  Arianna Huffington, Co-Founder of Huffington Post, migrated from Greece.  Shahid Khan was born in Pakistan, just to mention a few.

On the other hand, migration has become one of the most contentious and controversial issues of modern times to the host countries. Some think migrants take over jobs, and contribute to a rise in crime. Some accuse migrants of changing the demographical faces of host nations.

In recognition of migrants, the United Nations General Assembly proclaimed December 18, as International Migrants Day.  It is seen as an opportunity to recognize the contributions made by millions of migrants to the economies of their host and home countries, and to promote respect for their basic human rights.

Public Libraries have contributed immensely toward the welfare of migrants.  Programs like English as a Second Language, GED and Citizenship Corners have given migrants opportunities in their respective societies.  Above all, one does not need a passport, a birth certificate, a social security card, or a state issued ID card to visit a public library or use its services.

In his book, “Dear America: The Story of an Undocumented Citizen,” young Jose Antonio Vargas, a Filipino with a Spanish name (the Philippine islands were colonized by Spain who ruled them for over 370 years) shares his experience as a migrant in California, more so, when he went to the DMS to apply for a drivers license.

Jose says, “I swallowed American culture before I learned how to chew it” and the Los Altos Public Library as well as the Mountain View Public Library were his “church” in this regard.

Recognition should also be accorded to Emma Lazarus whose poem, “The New Colossus,” sculpted in bronze on the “Statue of Liberty,” says, “Give me your tired, your poor, your huddled masses yearning to breathe free.”

In recognition of International Migrants Day, December 18, 2021: The triumph and trepidation of migration from the point of view of some migrants in the U.S.A.