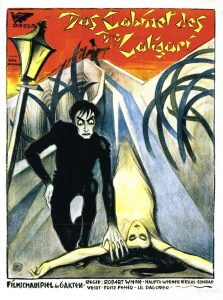 A classic example of “German Expressionism” (a 1920s filmmaking style.) The Cabinet of Dr. Caligari is also one of the most famous silent films of all time. Using abstract, slanted and flat sets, disorienting lighting and exaggerated makeup, the viewer is left to wonder what is real and what is imagined. The film concentrates on the title character, who commands a sleepwalker named Cesare to commit a series of small town murders. Movie critic Roger Ebert called it the “first true horror film.” A must see for film, horror and art history buffs.