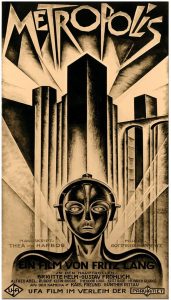 Released in 1927, Metropolis is considered by many to be the most influential Science Fiction film of all time. Famous for its “Art Deco” meets “Industrial” look, it remains an important example of the German Cinema’s Expressionist movement. Metropolis tells the story of struggle between the upper and lower classes of an underground city in 2030 and the “mad scientist” that tries to control them both. This 2010 restored version features 25 minutes cut from the original as well as a new recording of the original movie score. A truly unique visual movie experience.