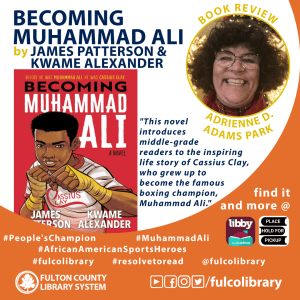 Fans of James Patterson and Kwame Alexander will enjoy the biographical novel about the boxer Muhammad Ali, entitled Becoming Muhammad Ali. This novel introduces middle-grade readers to the inspiring life story of Cassius Clay, who grew up to become the famous boxing champion, Muhammad Ali. It is a perfect read this winter, as we remember Muhammad Ali on what would be his 80th birthday on January 17.

Becoming Muhammad Ali centers on Cassius Clay and his best friend Lucky. The book is written in prose and free verse poetry. The prose is narrated by Lucky and the poetry narrated by Cassius. The book is structured in rounds, like boxing rounds, instead of chapters. There are 10 rounds in the book. The first 9 rounds describe Cassius’ young life in the West End Neighborhood of Louisville, Kentucky where he grew up. It describes shares some of Cassius’ relationship with his parents and his experiences at school. Cassius had some learning disabilities and did not like school. In addition, Cassius had some experiences with segregation and bullying, which helped him decide to become a boxer. Readers also learn about Cassius’ special relationship with his grandfather and the beloved words he taught him upon becoming a boxer. The climax of the book occurs in the final round. This is where the authors describe in detail how after Cassius Clay became the Heavyweight Champion of the World his life changed. Here, readers learn how Cassius' beliefs of injustice led him to practice Islam and change his name to Muhammad Ali. This text, supplemented by the black and white drawings enables readers to fully understand the life of Muhammad Ali and why he is commonly referred to as the Greatest and the People's Champion. Becoming Muhammad Ali is available in hardbound, eBook on Overdrive/Libby, and Audiobook or eBook on eReadKids  with your Fulton County Library Card.

Check out Becoming Muhammad Ali on eReadKids, Libby, or from your branch's shelves with your library card today!