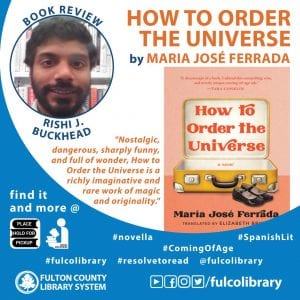 Looking for your next read? Check out How to Order the Universe by Maria José Ferrada, reviewed by Fulco Library staff, Rishi J.

“…We were secondary characters in a larger story. A series of elements—ghosts, faith in the Great Carpenter, my early vocation, the times we were living in—could have crossed paths, and then continued on their way, but instead they collided head-on”
- Maria José Ferrada, How to Order the Universe

“How to Order the Universe” by Maria José Ferrada is a powerful, complex novella written in a captivating style that resembles poetry. Her writing style utilizes a number of different literary tools. For example, Ferrada’s use of metaphor helps the audience connect with the other characters in the book. This connection is further emphasized by the use of negative space throughout the book. The negative space creates the simplistic view of a child growing up during massive upheaval in Chile.

This story brings to life a coming-of-age story for a very young girl named M during the Pinochet-era of Chile during the 1970’s-80. M is the seven-year-old daughter of D, who is a travelling salesman. M is D’s assistant while he travels the countryside looking for small towns to sell Kramp hardware merchandise. During this internship, she learns a lot about the world around her and how to communicate through body language. For example, she would practice different looks in the mirror so that when they visit any hardware shop, she would be able to connect with the owner of the shop. “If the person in charge focused on my pupils, instead of encountering me, he or she encountered every possible form of fragility.” Her methods help D sell a lot of his merchandise all over Chile. She becomes a reliable companion for her father while he travels for work.

M is introduced to a variety of other characters like E, and S. All these characters play a major role in M’s upbringing. For example, S is also a travelling salesman that sells perfume. Through working together, she “encountered the multiverse theory for the first time. For S had a parallel life with another wife and son.” This experience leads her to the realization that “the world was a ridiculous theater.” With E, the audience learns more about what is happening in the background of the book. E was a photographer who created a relationship with D over movies that aired at the university cinema. E also had a history with M’s Mother before M was born. This all leads to the moment when things change forever for M at the age of 9. She tries to preserve all the experiences during her time as a traveling salesman assistant as a fantasy in her past. Six years later, she tries to reconnect with D. However, M slowly realizes how D never changed over time.

This story reminds me of the narrative style of To Kill a Mockingbird by Harper Lee. Both characters are very young girls growing up in a chaotic world. Two major differences that are major factors for the story are the setting, and the philosophical and moral lessons that M learns while working under her father. The setting of Pinochet-era Chile is marked with violence, bloodshed, mayhem and paranoia throughout Chile. The philosophical and moral lessons that M learns range from how to manipulate people to get what you need, to realizing how all things fade from existence over time. This is a poignant short piece of fiction that can be finished in one sitting. It will move you to laughter, and you may shed some tears when the story ends.

Check out How to Order the Universe from your branch's shelves with your library card today!

How to Order the Universe