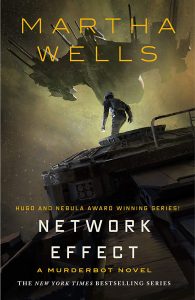 Murderbot just wants to be left alone to watch its shows – and protect its humans.  Murderbot might have been a human once, but now it is a heavily augmented and armored security appliance or SecUnit; rented out by The Company to anyone that needs the protection and can pay the fee. Think RoboCop without all the 80s baggage.

Murderbot’s journey toward self-understanding is just as fraught, but the diverse found-family around this self-liberated SecUnit helps it shoulder the load of feelings it just wasn’t programmed for. Network Effect builds to a frenetic finale of sacrifice, snark, and suspense that made me laugh and cry.  Any fans of space opera or military fiction with a smirk will enjoy, as will fans of Philip K. Dick, Becky Chambers, or Neal Asher.

All four novellas and Network Effect are available in Libby/Overdrive and book form (when we begin curbside service), so place your Holds now, they are already very popular.