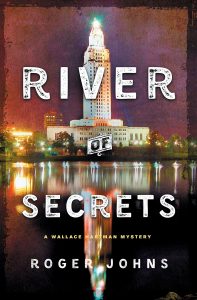 Southern writing has an affinity for the Gothic. Just as the blues has a tendency to explore the dark side of the human condition through murder ballads and tales of heartbreak and madness, Southern writing tends toward Noir. There’s something in the humidity, in the dark, liquid atmosphere of the Southern imagination that fascinates on the horror lurking under the surface.

Roger Johns’ debut novel, Dark River Rising, and his new work, River of Secrets, both deliver fast-paced, gritty crime drama with heavy note of place. Johns’ Baton Rouge oozes mystery, and his heroine, Police Detective Wallace Hartman, is an ideal guide for navigating the city’s murky underbelly. In River of Secrets, Detective Hartman investigates the murder of a politician with problematic associations. The evidence leads Hartman in one direction, but her gut leads her in another. She’ll have to use all her wits to solve the case and protect the ones she loves.

Roger Johns’ experience as a lawyer and professor deepens the world in which River of Secrets unfolds. Johns is a good observer, and his attentiveness, along with his sense of tone, makes his Baton Rouge seem both dangerous and familiar. There is just enough real-world know-how in Johns’ prose to satisfy fans of police procedural fiction, and Johns’ rich cast of characters are varied and human, sympathetic and monstrous, and, most importantly, surprising in the crucial moments.

Roger Johns, a native of Louisiana, now lives in Georgia with his wife. Johns was named Georgia Author of the Year in the mystery category for his first novel, Dark River Rising.