The Central Library of the Fulton County Library System is a Federal Depository Library. It was nominated in 1880 by Nathaniel Job Hammond, John Lewis's predecessor in representing the Fifth District, originally from Elbert County, a drafter of the revised post-Civil War Georgia state constitution who was returned to Congress four times. Central's depository is now the oldest in Georgia and the only one located in a public library instead of a university or special library. So what’s in it for you?

In a time when there were were not as many publications as there are now, Congress had to approve funding for the printing of each copy of each title. Those were distributed only to a select few. If you wanted to know what was happening in Washington, and you weren’t an elected member of Congress, you could look for a digest of the top items, such as the Atlanta Constitution’s “What Congress Did” column when Congress was in session.

With the depository system, the general public were given access to each publication. In Atlanta, the Fifth District’s publications were designated to go to a subscription library, the Young Men’s Library Association of Atlanta, and later the Carnegie Library of Atlanta. 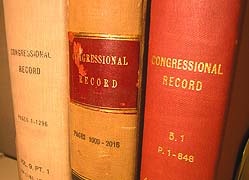 One of the most popular early Federal publications was the daily Congressional Record, in which one could read verbatim the words of those sent to Washington by the people. It’s still pretty entertaining at times. Other than Congressional publications, other early reports authorized to be printed and disseminated by Congress were the annual report of the Department of Agriculture (which would have included reports of the Weather Bureau, food safety, and marketing) and the multivolume The War of the Rebellion:  a Compilation of the Official Records of the Union and Confederate Armies.

In segregated Atlanta, it would not have been easy for African-American readers to consult these documents, though there is evidence that accommodation sometimes was made by individual librarians. But one of the results of Hammond's 1880 action is that today, all residents of the city of Atlanta, black and white, have inherited a collection that is quite old and broad, covering nearly every agency of the government, including some agencies no longer in existence. Even though some of these publications have since been digitized and can be found online, many others have not. And sometimes it's just cool to hold in your hand a copy of the same book delivered to an elected representative's office back in the late 1800s.

One collection, that of the Civil Rights Commission, was moved to the Auburn Avenue Research Library branch in 2018 as Central closed for renovation. Thousands of government documents are cataloged in the library catalog and others in the Catalog of Government Publications, opens a new window. The library also maintains webpages to help the public find digital documents by topic, opens a new window. Government documents are frequently the source of news stories. By law, each federally-designated depository must retain one staff person to help the public find and gain access to these documents, so if you ever hear about a Federal government publication you can't find yourself, contact the Ask-A-Librarian service for help.