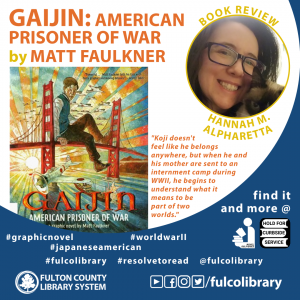 Looking for your next read? Check out Gaijin: American Prisoner of War by Matt Faulkner, reviewed by Fulco Library staff, Hannah M.

Set in 1941, Gaijin is the story of a half-Japanese boy, Koji, who finds his home is no longer his home. Shortly after the United States declared war on Japan, the mass relocation of Japanese-American families is underway. Koji and his mother are forced to leave everything behind as they are sent to an internment camp. Koji quickly realizes that being half-white in a camp full of Japanese is nearly as odd and alienating as being half-Japanese in a predominantly white city. Koji struggles with his identity throughout the story, sometimes considering himself one or the other.

Through Koji, readers see just what it was like to live in one of the camps during World War II. Gaijin is an eloquent graphic novel that discusses the horrors of Japanese internment through the eyes of someone who does not feel they belong anywhere. The story would appeal to many different readers, and all readers would benefit from the story to learn about one of the many dark stains on American history.

Check out Gaijin: American Prisoner of War on from your branch's shelves with your library card today!