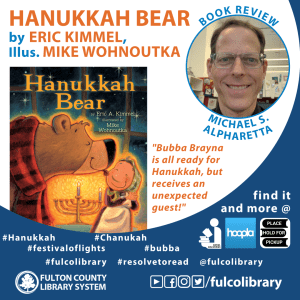 Looking for your next read? Check out Hanukkah Bear by Eric A. Kimmel, reviewed by Fulco Library staff, Michael S.

Chanukah, one of the most widely observed Jewish holidays, is a joyous eight-day celebration. Also called the “Festival of Lights”, celebrants light a candle each night on a candelabra known as a menorah, spin a top called a dreidel and eat fried foods such as donuts and potato pancakes. Chanukah/ Hanukkah-which means "dedication" in Hebrew, commemorates the victory of a small group of Jewish rebels over the armies of Syria in 165 B.C.E.

Hanukkah Bear introduces the reader to Bubba Brayna, a 97 year old grandmother who, on the first night of Chanukah, has invited the town Rabbi for latkes. Poor Brayna doesn’t hear or see well and mistakes a bear who appears at her doorstep for her beloved Rabbi.

Hilarity ensues as she serves him food, oblivious to his true nature. The bear grunts, growls and eats, well, like a bear. He eventually leaves with a full belly.

After the real rabbi appears for dinner, Brayna laughs at her mistake and enlists her neighbors help to make a fresh batch of latkes. Warm and whimsical illustrations complement this timeless story.

Check out Hanukkah Bear on Hoopla, or from your branch's shelves with your library card today!