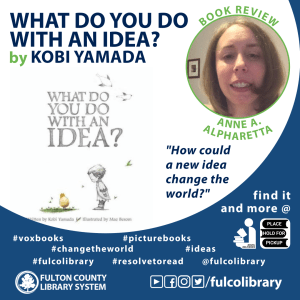 Looking for your next read? Check out What Do You Do With An Idea? by Kobi Yamada, reviewed by Fulco Library staff, Anne A.

How could a new idea change the world? This picture book tells the story of a kid with a new idea. At first the idea is small, and he tries to ignore it. However, it continues to grow, and soon he can’t imagine his life without it. When he shares the idea with people, some think it’s silly and it can’t be done. Nevertheless, he continues to nurture his idea. Then one day, the idea metamorphizes before his eyes and changes the world. The world that was once gray and ordinary is now full of color and life.

This wonderful story encourages children to dream big. It gives them a concrete image of what an abstract concept like a new idea can do if it gets big enough. In the beginning of the book the idea is a little round egg with a paper crown. It’s the only object in color in the pictures. As the story continues, the idea grows and begins spreading color to the rest of the illustrations. By the end of the story, the idea has covered the whole page with color is no longer a little egg. It exists everywhere.

What Do You Do with an Idea? can be checked out at any Fulton County Library. It is available as a picture book and a VOX read along story. Borrow this insightful book today and don’t be afraid to follow your dreams.

Check out What Do You Do With An Idea? from your branch's shelves with your library card today!

What Do You Do With An Idea?

What Do You Do With An Idea?