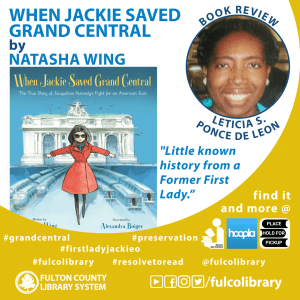 Looking for your next read? Check out When Jackie Saved Grand Central by Natasha Wing, reviewed by Fulco Library staff, Leticia S.

How many people know that former First Lady Jacqueline Kennedy Onassis helped saved one of the most famous structures in the world?! In 1975 Grand Central Station was on the verge of being knocked down and replaced with an office tower. New Yorkers were not happy about this decision.

Before becoming First Lady, Jackie Kennedy was born and raised in New York. She loved everything about the city-the natural beauty of the parks and the amazing architecture.

Ms. Onassis long had a fascination with preservation. When she moved into the White House it had been neglected for years. Jackie slowly restored the White House room by room to its former glory. So, years later when Grand Central Station was in danger of being destroyed Jackie wrote the mayor of New York City, Abraham Beame to save the world's most famous train station. She also understood that the station had fallen on hard times and did not look the same as when it opened in 1913. She felt the city could clean away the soot and dirt from the walls and ceilings to restore the building to its former glory. The Former First Lady and her supporters took the case to the highest in court in the land- The Supreme Court.

This is a great story of what can happen when citizens come together to stop our national treasures from being destroyed. Jackie Kennedy Onassis famous name certainly helped but she couldn't do it alone. She needed help from supporters from every walk of life.

I loved the illustrations from Alexandra Boiger. The drawings sort of look like muted watercolors and the angles the artist uses jump off the page.

This book can be found in our catalog and in hoopla.

Check out When Jackie Saved Grand Central on Hoopla, or from your branch's shelves with your library card today!