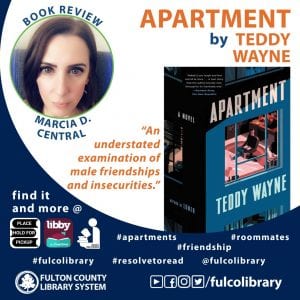 Looking for your next read? Check out Apartment by Teddy Wayne, reviewed by Fulco Library staff, Marcia D.

New York City’s Columbia University in 1996 is the setting of Teddy Wayne’s latest novel Apartment. Apartment follows the relationship of an unnamed narrator and his friend Billy. Throughout his undergraduate studies at New York University, the narrator remained friendless and adrift, so when Billy, a student in one of the narrator’s graduate classes in Columbia University, praises and defends the narrator’s writing assignment, a friendship blooms. The narrator quickly invites Billy to live with him in his two bedroom apartment and Billy, who had been living in the basement of the bar where he works, gladly accepts. In return for living with the narrator rent-free, Billy offers to do the cooking and cleaning. This arrangement works for a while, with both Billy and the narrator enjoying the friendship and the living situation. Over the ensuing months however, the relationship shifts as Billy begins to eclipse the narrator in their classes, in their social circle, and in their writing.

As their friendship devolves and Billy loses interest in the narrator, the gulf between them becomes noticeably more about class and power, than personality. The narrator is clearly used to a life made simple by wealthy parents and familial connections, while Billy is the product of a small working class town in the Midwest, and they both know it. The narrator even states, “He would always have to struggle to stay financially afloat, and I would always be fine, all because my father was a professional and his was a lay-about. I had an abundance of resources; here was a concrete means for me to share it.” Ultimately, Apartment is a subtle meditation on male friendships, male insecurity, and the inherent power struggle in all relationships.

Check out Apartment on Libby, or from your branch's shelves with your library card today!