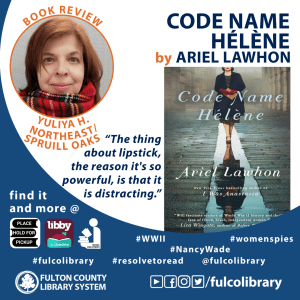 Looking for your next read? Check out Code Name Hélène by Ariel Lawhon, reviewed by Fulco Library staff, Yuliya H.

Code Name Hélène is a beautifully written and well researched historical fiction based on the true story of Nancy Wake. The heroine was an Australian woman who was on the most wanted list of the Nazi regime in France and a resistance fighter in WWII. The story is told from four code names that were actually used by Nancy Wake. She was known as ‘Madame Andree’, ‘Lucienne Carlier’, ‘Helene’ and ‘The White Mouse’. The author tells the story about a strong audacious woman wearing red Chanel lipstick as a shield, a beautiful marriage, war, friendship, and sacrifice. A very engaging, fast paced novel with a mix of different storytelling genres – history, romance, drama, comedy, action.

In 1936 Nancy Wake lives in Paris working as a freelance reporter for Hearst newspaper when she meets the handsome French industrialist Henri Fiocca. Falling in love with Henry is easy and soon she becomes Mrs. Fiocca. War is declared and the Germans invade France. And Nancy starts working for the French Resistance taking the code name The White Mouse.

The book is an inspiring apotheosis of love, courage and sacrifice. Love wins over fear, brave men and women give their lives so that others can live.

Check out Code Name Hélène on Hoopla, Libby, or from your branch's shelves with your library card today!