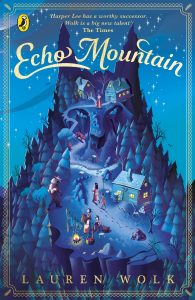 The family of twelve-year-old Ellie has lost everything during the Depression and left the town to live on a wild mountain in a cabin her father builds himself. After her father is injured and trapped in a coma, Ellie grows into becoming "two opposite things": an excellent wood-girl who can hunt and trap and fish and harvest, and an echo-girl, who feels the pain of animals she trapped and killed and plants she harvested. "I was someone who noticed things that others missed" she says, "I felt stronger and happier if I was able to do a hard thing and do it well". Her empathy with animals is beautifully narrated: harvesting honey she feels the bees' terror "Felt their panic as they choked and nodded in the smoke, their queen weeping." When they sting her, she feels only sorrow knowing they died to sting her.

Then she meets Cate, a woman known to some as "the hag", who is a healer, living alone at the top of the mountain. To get water for her from a hidden spring Ellie pushes her collecting jar flat in the moss, where a pool rises and flows into its mouth "as if the jar were the thirsty one". "Good", says Cate, "a girl who can tap a spring". "Any girl can do that", says Ellie. But Cate knows that Ellie can do many things that other girls can do, but don't do. She will grow to become a capable healer. But in the meantime, she is still a twelve-year-old girl with much to learn about other people and how they deal with suffering. In the end, she is closer to her mother "closer, now, because I'd met her halfway".