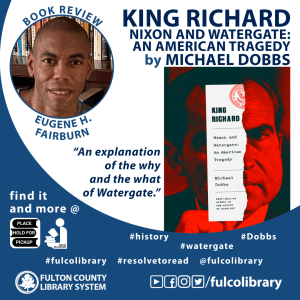 Looking for your next read? Check out King Richard - Nixon and Watergate: An American Tragedy by Michael Dobbs, reviewed by Fulco Library staff, Eugene H.

If you grew up when I did, you probably remember hearing adults and commentators on television, radio, etc. discussing Watergate ad infinitum. As a kid, it was difficult to make heads or tails of the whole thing and as an adult it can still get pretty dicey when trying to get a full understanding of what exactly happened, why it happened and what does it all mean. Well, for simplicity and drama, veteran journalist and author Michael Dobbs’ King Richard - Nixon and Watergate: An American Tragedy pretty much nails explaining the what and the why of Watergate.

Dobbs achieves this by first using his access to the recently released 3700 hours of tape recordings to recreate actual happenings with a high degree of realism and attention to character. Secondly, he concentrates on the first one hundred days after President Nixon’s second inauguration in order to distill a long tumultuous chain of events down to several “hinge moments”.

Dobbs prefaces the book with a list of featured dramatis personae. He also divides the book into four sections that borrow their titles from concepts in Greek tragedy. Most importantly, he is very successful in illustrating the true tragedy of these events in this unsentimental and straightforward account.

Check out King Richard - Nixon and Watergate: An American Tragedy from your branch's shelves with your library card today!