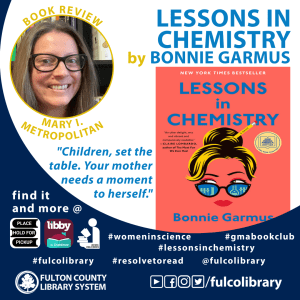 Looking for your next read? Check out Lessons in Chemistry by Bonnie Garmus, reviewed by Fulco Library staff, Mary I.

From the moment I was introduced to Elizabeth Zott in Bonnie Garmus’s incredible book, I was sure I was going to love her. It’s the 1960’s and Elizabeth Zott is a chemist. Actually, it’s the 1960’s and Elizabeth Zott is a brilliant chemist. Unfortunately, she is a very talented woman in field dominated by men in a time when her male colleagues at Hastings Research Institute don’t exactly have the hang of equality of the sexes. To say the very least. Our heroine finds herself fighting against a biased system to mark her place in her field, advance her own research, and leave her own mark without the assistance of a male counterpart.

Enter Calvin Evans. A famous chemist who finally recognizes not only Elizabeth’s beauty and magnetic personality, but her genius and scientific talent as well. Romance blooms over scientific theories and borrowed (stolen?) lab beakers, fueling gossip and resentment from their research counterparts about the couple “living in sin.” But they can drown out the negative and focus on the positive, at least for a while. Through a series of twists of fate, the happiness bubble eventually bursts. Elizabeth finds herself estranged from her research lab and emerges as the host of a cooking show on television where she refuses to play the happy home wife but encourages the women she reaches through the screen to challenge the status quo. Much to the initial dismay of her producers, Elizabeth Zott’s motto that cooking is serious science, “in fact, it’s chemistry,” captures the hearts and minds of women everywhere and her popularity soars.

This story is rich and complex, the characters witty (the good ones) and sometimes unbearable (the bad ones,) and it is guaranteed you will not stop turning the pages until the end. Hilarious, heart-breaking, and definitely worth a read!

Check out Lessons in Chemistry on Libby, or from your branch's shelves with your library card today!