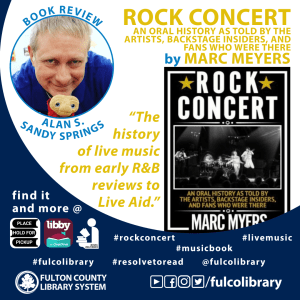 Looking for your next read? Check out Rock Concert: An Oral History as Told by the Artists, Backstage Insiders, and Fans Who Were There by Marc Myers, reviewed by Fulco Library staff, Alan S.

I’ve been to a lot of concerts over the decades. A LOT of concerts. I love everything about the scene—the crowd, the anticipation, the energy, and the shared experience. So it was great fun to read Rock Concert by Marc Myers, a book that traces the phenomenon of the concert industry from its origins in the 1950s through Live Aid in 1985, the most ambitious concert staged up to that time.

This book is built on interviews with those who made the shows happen: the roadies, the techs, the designers, the promoters, and of course the artists themselves. There are road stories from all the biggies: The Beatles, the Rolling Stones, The Grateful Dead, Led Zeppelin, Heart, Pink Floyd, Jethro Tull, and a lot more.

But the book covers more than just what you see on stage; there are fascinating contributions from people like the pioneers who put together the blues and R&B reviews in the 50s, a roadie who worked with Heart in their early club days, the guy who invented wireless guitars and how that changed the game for performers, the lady who designed the iconic oversized suits for David Byrne of the Talking Heads, the guy who developed a whole new sound system for the Beatles’ American tours, the artist who created the inflatable characters for Pink Floyd’s The Wall shows, etc.

In fact, one of the most enlightening parts of the book was the detail it provided about how The Wall shows were designed and put together. That tour was an immense technological undertaking and I was surprised at the amount of detail that went into making those shows happen the way Roger Waters wanted them to happen.

So if you love concerts as much as I do, then I’m sure you’ll really enjoy this book.

Check out Rock Concert: An Oral History as Told by the Artists, Backstage Insiders, and Fans Who Were There on Libby, or from your branch's shelves with your library card today!